A letter of love and truthful expression of the human feeling brilliance and a support of the eternal human pulsation.

The author’s ,whose , education is in both French and Arabic, he was closely connected to the characters of the novel, that made   him tangibly present with these characters.

A wonderful novel with its plot and actions. The reader might think it is a  part of the author’s life in Paris during the seventies. He studied in its universities. He could, with brilliance, present a psychoanalysis in a nice philosophical framework enlightening its events and showing people coming from varied cultures united by the human pulsation, ambition and endurance and sacrifice in the life trip.

Sami is the protagonist of the novel, enlightening the other characters, he presents a sample of the human love glittering with goodness, love and peace

This novel was published in 2008 by Al-Ahmadi for Studies and Publishing in Cairo and had a wide resonance with writers and critics, and was one of the reasons the writer obtained a certificate of honor” Palme Academic from the French Ministry of culturel  for the services he provided to French culture in addition to his other books. 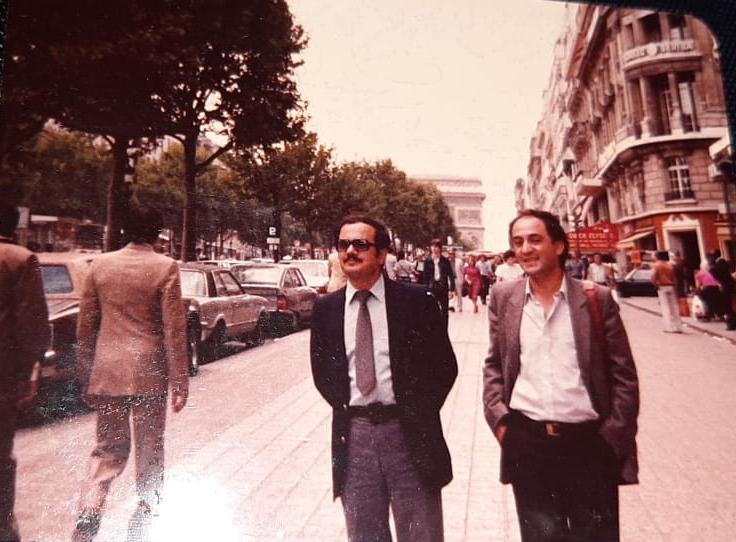 When the two men arrived, in the Latin Quarter, in its first bloom, the eyes met, the souls flourished and the faces smiled. After they had embraced, and changed the friendly speeches, Sami said to himself: ‘from where, and how, did he come!’ while David was smiling and thinking about this strange encounter. Then, he started laughing happily looking at Sami, then he said: “a strange thing, Sami, since the morning I have felt quietude, with no reason”, but the inquietude was looking on his eyes, and his hands were shaking but sooner he became quiet and his fear stopped. He cleaned his face with a handkerchief. He looked at Sami with a pale face and said: “Oh, how am I happy to see you” and added, “I have come to Paris a year ago, and have faced difficult situations, which I will later tell you, but let’s eat first, two days on one meal”. 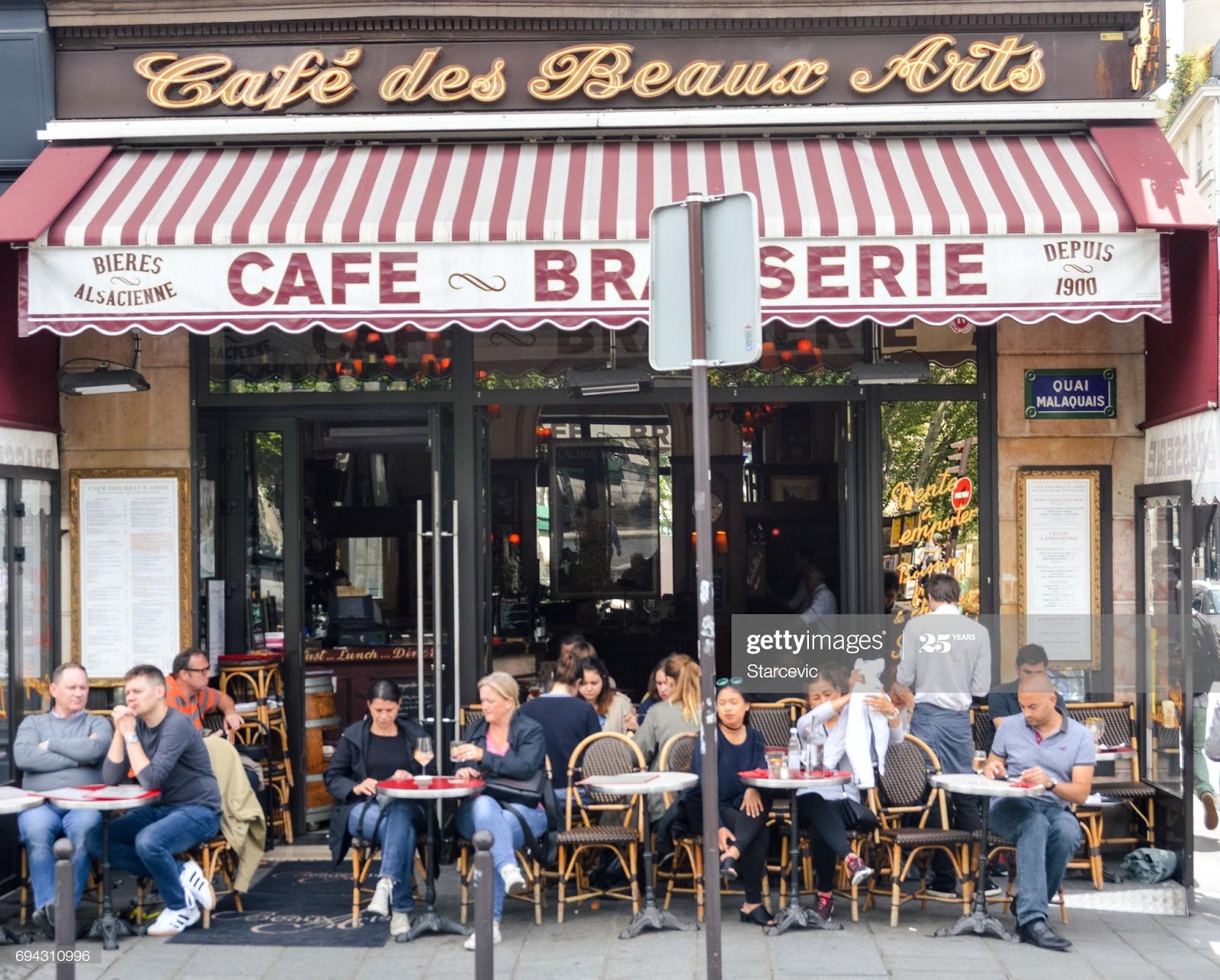 When David was telling his sufferance in Paris to Sami, entered a tall man in a gray expensive dress and black shoes, he looked older than forty years, in brief, he was strange.

When he passed in front the table where sat the friends, he stopped, then sat on a close table, two steps away.

“He is French” said Sami.

David interrupted: “How did you know that? He is not our business, leave him away”.

At that moment David stopped talking because the stranger suddenly got up and walked towards them. He spoke in a French dialect without deforming his accent: “Excuse me! I do not know you but I allowed myself…”.

They couldn’t but stand to greet him. Then, he asked politely in a spontaneous way: “May I sit down?”

They let him a space and he sat between them politely and started immediately the speech: “If I am not mistaken I have heard you speaking an Eastern language”. The stranger looked at David with his right black eye. David answered: “No, you are not mistaken. We are students from the Midell East, studying in France”

The stranger shouted: “Oh, I am from Marroco  origin, I have lived in France for twenty years. I beg your pardon on my intrusion. My name is Adam from Maghreb, I am working in one of the French companies” and he continued his speech in a calm and quietude leaning on his back.

“I came to France when I was young so, I have forgotten to speak my language , you have to forgive me. My children have become young men; I live in the north of Paris. I haven’t seen my country for twenty  years …” then, he added.. “Yes this is life I did not know how I came and how the years passed very soon”. While Adam was busy telling his story without being asked to give the details, David interrupted him: “Drink the coffee before it gets colder” turning to Sami whispering: “Oh poor, he needs compassion; damned is the expatriation. Adam interrupted him with his shining eyes to complete his speech: “I like to come back with the children to Morocco to live near the parents but unfortunately it was too late. My children, now, are used to the life here and to schools here and there are no more links between them and their original country. Oh, my sorrows!, Oh my losses!”. Sami interrupted him: “This is God’s will” Adam replied: “I assume the responsibility  …” and turned to the waiter “…one beer please” continuing his words: ‘Yes, this is a big mistake. God is the winner. It is too late; oh my losses!”

At that moment Adam took out from his pocket the morning French newspaper “Le Matin” and said: “Excuse me, can I see you again?

David replied: “Of course, with pleasure; but the problem is that I don’t have a permanent address”.

Sami interrupted: “But this restaurant is a place where we can meet from a moment to another on weekends”

Adam replied: “Your meeting is a joy, I am happy to know both of you, I hope to see you again. I will come here on weekends if the conditions permit”.

Adam stood next to the table holding a small bag containing his particular things and said in a Moroccan slang: “Goodbye; goodbye  … ” He went out without looking back.

David sighed and said: “No rest for anyone”

Sami answered him; “These situations are normal for man. It seems that anxiety is dominating you. Anxiety always dominates man in his leisure time.” He added, ” David, the treatment of anxiety is to have a serious job. But how did I discover that; the essence of men is reflected through their long companionship.”

David smiled, a smile showing his admiration for Sami and of their guest’s speeches and acts and said: “He is well-to-do and a nice-looking.”

David smiled: “Isn’t the return to reason a virtue?”

“I don’t know, David, it seems that man’s life is a huge procession walking forwards” He thought a little and continued: “Who doesn’t regret what he missed will have a tranquil heart”.

David felt an ecstasy he never felt before.  And while he continued to think deeply Sami interrupted him: “Why are you zooming out? Let’s go out, leave the things to the Creator.

In one evening during the month of October; the symbol of autumn, and within the corridor which united the two wings of the campus, leading to the restaurant, entered David in a crowd of students in front of the restaurant where the odors of meals are mixed with the odors of smoke. There prevailed a silence interrupted suddenly by Sami asking in a low voice: “Why don’t you stay in one place?”

“As I told you …I don’t have a fixed place to stay in I live temporarily in the university hostels…and I am looking for lodging…would I live with you if you don’t mind?

“Your stay with me will certainly please me but my room is not comfortable, however, we can manage things and I can help you financially, at least.

As soon as David heard Sami’s answer, he burst into laughter and followed it in a fine voice: “Thank you…thank you”

Sami said to himself: “I must confess that my reasoning was right I had to answer David with precaution. I spent a long time looking for lodging and finally I found a room in the Latin Quarter, on the street of ‘Saint Jack’, near the Sorbonne University. The room was in the fifth floor in an old building without a lift. The fact of living with another man would eliminate doubts. It is necessary to take all measures, particularly that, I don’t know anything about the neighbors and the opinion of the building owner…

Despite that Sami was perplexed and busy thinking, his companionship for David since the morning made him acquire many things. He was fascinated by the Parisian lights and life and wished in his insight to stay very long

The two friends entered in a restaurant full of life, its roofs were very high; and very old paintings were highly hung on its walls.

Sami was not aware of himself until he was sitting next to the table, without knowing how he came, while the moonlight rays were entering from one of the windows.

Sami looked at the students around him: “They are from different nationalities” and said to himself: “Certainly there’re students who came from the East. He stopped for a moment then he was able to see students around him. One of them particularly attracted his attention. It was a kind person, in a beard; wearing a wide sweater and unfastened sport shoes. He was preparing high studies in geometry,

“Welcome David – how are you?’

“Welcome Joseph – a long time ago.”

“Why don’t you come to the university campus, but rarely?”

“You know the conditions and the lodging …”

“I introduce to you my brother Sami, a new student who wants to enroll at the university.

Sami looked at Joseph and one idea jumped to his mind: “It is he and his alike that deserve to be students. He has a scholarship from his country. He has only to have a lodging clothing and restaurant, as for me I may find the agreement of the scholarship as I may not”. Ideas attracted him and ideas and different feelings flew into his head. Now, he is thirty years old and what after all these years …What is he waiting and what can he do? Will he complete his studies and go back to his country, until he reaches the old age? And what will his life bring him here? What benefit will he get? What will he gain? It is the routine and the calm of life. Glory will not be attained by those who are slave to routine. Why will I be back to this routinish life? Why don’t I stay here? david is right…Yes. Then a silence dominated interrupted by Joseph with his joyful voice and his brightening face.

“When did you come to Paris?’

“Will you stay for a long time in Paris?”

In reality, Sami was not able to answer the question because it is useless and precocious.

The utensils were crackling when the students were moving them on the table and the sounds of the spoons and knives clacking dominated those of the students.

Graphology in the balance

عزيزي الزائر يرجى منك اغلاق اضافة حجب الاعلانات علما بأن الأعلانات التي نقدمها لاتحتوي على اي اضرار وشكرا لتفهمكم
Our website uses cookies to improve the use and functionality of the site, and to achieve a better understanding of how visitors use the site and the tools and services provided to them. Cookies help us to customize the MazeMaster website according to your personal needs, and to increase its ease of useOkPrivacy Policy